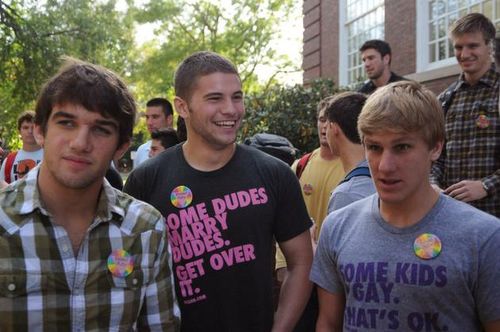 Harvard's wrestling team made a huge show of support for LGBT rights yesterday on National Coming Out Day, wearing t-shirts and pins in support of a gay non-resident tuto rand their LGBT peers, the Crimson reports:

According to wrestler David J. Lalo ’13 (above, left), it was a non-resident tutor in Lowell House, Robert Joseph “R.J.” Jenkins, who inspired the team to participate in National Coming Out Day. “[R.J.] has made a tremendous impact across our team,” Lalo said. “We wanted to show him we support the LGBT community.”

Jenkins, who is openly gay, said that he casually brought up the idea of wearing the pins one day while speaking with several athletes in the Lowell dining hall. He said the men responded positively to his proposal.
“I started to imagine it as an opportunity for them to come out as allies,” he said. “To think about a day for allies to come out and say, ‘I accept these people in my life. I accept them for who they are.’”

Said team captain Walter Peppelman in a press release obtained by Towleroad: "The Harvard Wrestling family believes that it is important to send a message of hope, love, and acceptance to the Harvard community. Today is also an opportunity for us to begin to break down some of the negative stereotypes attached to our sport and to athletics in general. We want to show that the members of Harvard Wrestling love and respect individuals for who they are, regardless of their sexual orientation and pledge to do our best to make them feel at home at Harvard."

One more shot of the whole team, AFTER THE JUMP…

On National Coming Out Day, Athletes Come Out as Allies [the harvard crimson] 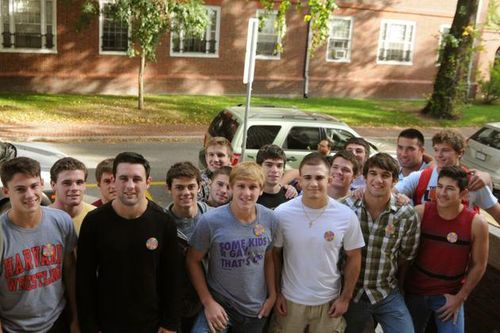