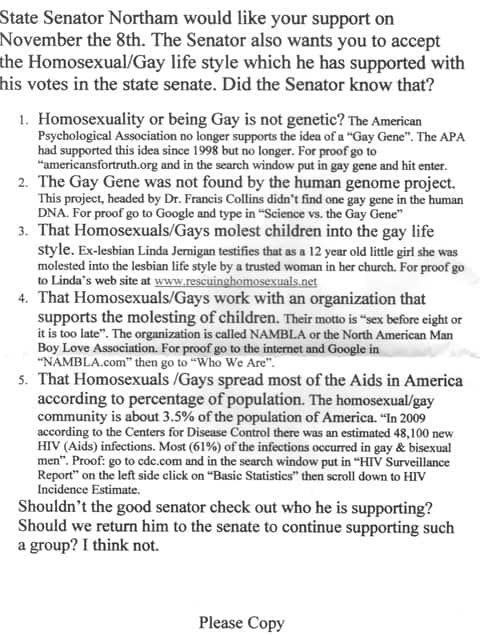 John McManus at AltDaily makes note of the Virgina state senate race and one particular flyer (above) being circulated there which hasn't been attributed to anyone but targets Democratic Senator Ralph Northam.

But as the Washington Examiner explains, “If Republicans gain just three seats, they will flip the Senate …, giving Gov. Bob McDonnell carte blanche to enact the conservative agenda he ran on in 2009.”

One of those three seats belongs to Dem. Sen. Ralph Northam of the 6th District (primarily Norfolk and the Eastern Shore), whose opponent, Ben Loyola, wants to end corporate taxation and the income tax and the Department of Education. Loyola’s website calls marriage a “a sacred institution reserved by God to only exist between one man and one woman.”

Yesterday in Norfolk a particularly egregious unattributed flyer asked five rambling, incoherent questions about whether Ralph Northam knows that “Homosexuals/Gays molest children into the gay life style,” that “Homosexuals/Gays work with an organization that supports the molesting of children,” that “Homosexuals/Gays spread most of the Aids in America.” Preposterous as this may sound, there’s a reason the Tea Party is distributing these flyers: in political races, lying works. Ben Loyola’s campaign denies involvement, but as whoever passed out the flyers knows, this strategy out of Karl Rove’s handbook libelous attack politics will help Loyola.