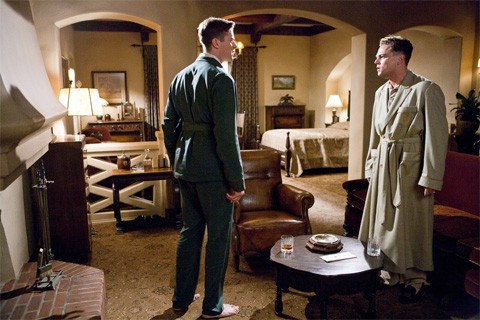 The Hollywood Reporter talks to Leonardo DiCaprio and Clint Eastwood about the upcoming biopic J Edgar. Sounds as though they play the gay element right on the edge. 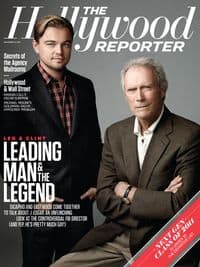 On the gay kiss:

Neither Eastwood nor DiCaprio has drawn any conclusions about Hoover sexuality.

"Whether he was gay remains to be seen," Eastwood says. "But [he and Clyde Tolson] were inseperable (sic) buddies. Was that becase he didn't trust anybody else or was it a love story? I think they had a great affection; whether it was gay or not, I don't know."

DiCaprio elaborates, "What you cannot doubt is that Clyde Tolson and he had a relationship that spanned most of their life; they lived with each other, had lunch and dinner, and [Hoover] left everything to Clyde. Unarguably, they were partners in some sense."

The film depicts Tolson aggressively kissing Hoover on the mouth at the end of their fistfight.

And the rumored cross-dressing:

"Along the way, people accused him of [that]," Eastwood notes. "But nobody knows how accurate it was. Evidently the woman who accused him of that, her husband had been sent to the slammer by Hoover. So you don't know how much was vengeance."

Eastwood himself believes "there is a certain amount of truth" to all the allegations, but wanted to retain some ambiguity. One scene in the film shows Hoover wearing his mother's dress.