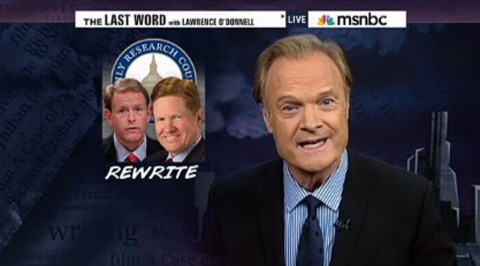 On Saturday, Brandon posted about the Family Research Council's jaw-dropping award to deadbeat dad Congressman Joe Walsh (R., IL), and last night Lawrence O'Donnell called them out as well, in a delicious rant against FRC, Tony Perkins, and Peter Sprigg and their obsession with gay sex.

Said O'Donnell: "They have now publicly announced that yes, this whole FRC thing is a complete joke. They chose to do that at the end of last week by giving an award to the most famous deadbeat dad in America."