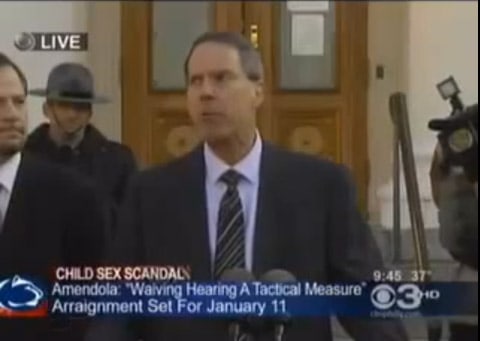 Extremist right-wing homophobes and hate groups have already tried to use the Jerry Sandusky sexual abuse case to push false and professionally discredited arguments that child molestation and pedophilia are linked to homosexuality, so don't expect them to ignore the phone number Sandusky attorney Joe Amendola suggested skeptics call in a press conference gaffe this week.

At one point, Amendola discussed the possibility that Mike McQueary witnessed a rape, told Joe Paterno and two university administrators, and no one did anything except tell Sandusky to stay out of the locker room with kids. To anyone who believes that version of events, Amendola said, "I suggest you dial 1-800-REALITY."

Writes the AP: "Amendola says he didn't know the number was real and vows not to use it again."

Previous Post: « Episcopal Bishop Gene Robinson: Christians ‘Should Be Ashamed of’ Rick Perry
Next Post: Donald Trump Talks About Why He Canceled His ‘Great Debate’: VIDEO »