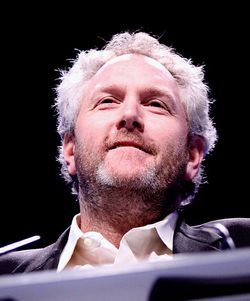 Conservative activist and pseudo-journalism mogul Andrew Breitbart has quit the advisory board of Republican gay group GOProud, due to the "vocational and family harm" that organization potentially did to Rick Perry advisor Tony Fabrizio. Fabrizio is the gay Perry staffer outed by GOProud's leadership after the Perry campaign aired a homophobic advertisement last week. Andy wrote about the outing here, giving a fine summation of the initial kerfluffle.

It is with sincere regret that I announce I must step down as a GOProud advisory member. On numerous occasions I have spoken with [GOProud leaders] Jimmy LaSalvia and Chris Barron of the significant impact the practice of “outing” had in my evolution from the political left to the right. I was under the absolute impression that both agreed. I have a zero tolerance attitude toward the intentional infliction of vocational and family harm by divulging the details of an individual’s sexual orientation as a weapon of political destruction. As an “Advisory Board member” I was not consulted on this extreme and punitive act. Clearly, there are more productive means to debate controversial ideas and settle conflicts. Therefore, I cannot in good conscience stand with GOProud. I still stand by gay conservatives who boldly and in the face of much criticism from many fronts fight for limited government, lower taxes, a strong national defense as well as the other core conservative principles.

Indeed. "Vocational and family harm" are always tragic. But I wonder: Why does Breibart feel so keenly for the family and wallet of Mr. Fabrizio after displaying nothing but contempt for the families and wallets of the working-class ACORN staffers he and his pal James O'Keefe so willfully misrepresented back in 2009? And why didn't he feel any sympathy for Shirley Sherrod, whose career he attempted to destroy with baseless charges of racism? Those individuals actually lost their jobs, which so far Fabrizio has not, and the ACORN workers didn't even have any fancy beltway connections to help them land on their feet.