ABC News profiles Amity Buxton, an 82-year-old woman who started the Straight Spouse Network after discovering that her husband knew he was gay since before they married in the late 1950's. 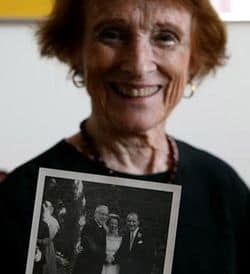 When he came finally came out, Buxton (was) devastated.

"I had to figure out what is homosexuality and how would it affected my life and what did it mean for my kids to be children of a gay man," she said. "Once I accepted it, I could rebuild my moral compass."

Part of rebuilding was vowing that no other spouse would share the same pain. In 1984 at the height of the AIDS crisis, she accepted an invitation to speak at a gay father's group in San Francisco to men who had no idea what their wives had experiences.

"We gave a talk to a panel of 50 men and tears were rolling down their faces," she said. "We were not their wives, so they listened."

Buxton wrote a book and became an advocate for gay rights, joining PFLAG and starting a support group in 1991. By 2001, the Straight Spouse Network became an independent organization and today has 54 support groups in 11 countries.

Says Buxton: "If gays and lesbians were allowed to marry someone of the same sex in the first place, out of love and truth, and commitment, then there would be fewer divorces such as we went through, stronger marriages, more lasting families, and more stable communities.