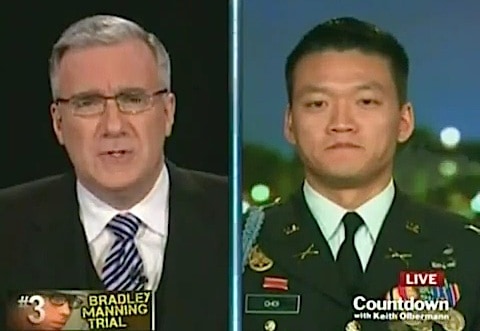 Lt. Dan Choi, who was thrown out of the courtroom at the Bradley Manning trial, talks about his view of the proceedings as a "show trial". Olbermann agrees that it is "ridiculous even by military standards".

FireDogLake has a report on Choi's ejection from the trial and the base, during which the rank was ripped from his uniform:

Choi, a West Point graduate, went to the Manning trial because “soldiers stand up for integrity, and if the code of ethics and army values are important, then we should support Bradley Manning.” He added that Manning’s actions were not only in the interest of his unit, but also in the interest of the country. “He believed that our country as a whole needed to have integrity. The law of land warfare says that if a soldier sees a crime — a rape or a murder — it’s their responsibility to report it. As I understood it, he brought it up to the chain of command. The chain of command knew about it, and they were the ones who were in violation of the law of land warfare. To not report it is to be complicit. He was the only soldier in the chain of command to do the right thing, so that’s why we have to support him.”

Watch Choi's appearance on Olbermann, in which he discusses the trial, and his ejection, AFTER THE JUMP…

And if you're following the trial, there are several updates HERE, HERE, and HERE.