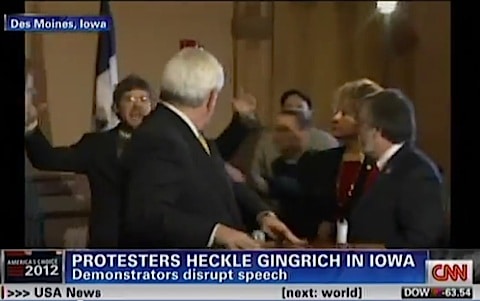 Newt Gingrich's press conference at the Iowa State Capitol was interrupted this morning by a group of protesters from the 99 Percent Movement, who yelled at Gingrich from behind the podium, and then later followed him as he left the Capitol, the Des Moines Register reports:

They yelled at Gingrich as he walked away:

“Speaker Gingrich, you can run but you can’t hide. We’re going to come for you everywhere you go.  You can’t show your face in public without seeing us.”

“You say you don’t like super PACs. How much money are super PACs spending on your campaign right now?”

It was also discovered today that the web domain NewtGingrich.com redirects visitors to embarrassing stories about the candidate.