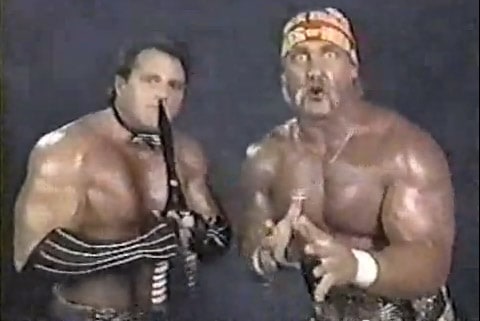 Hulk Hogan has filed a defamation lawsuit against his ex-wife Linda Bollea over various claims, including one that he cheated on her with fellow wrestler Brutus Beefcake, Us Weekly reports:

In her memoir Wrestling the Hulk: My Life Against the Ropes, Linda writes of harrowing physical, mental and emotional abuse at the hands of her husband during their 24-year marriage…

During radio interviews promoting the tome, Linda also accused her former spouse of cheating on her with another male wrestler, Brutus Beefcake.

"After the four-year crazy divorce I thought I'd heard everything I could hear in the courtroom. Then, all of a sudden she says I abused her, that I was violent. She told everybody that I was a homosexual…If any of that was true, I would admit it, and (if) I was a homosexual I would embrace it. It's just so crazy to hear, so I have a real problem with it… If you're going to say I'm something that I'm not to try to ruin my career and my livelihood… I have to answer her back. It's so ridiculous. I don't mean to laugh about it, because it's not funny. But it's insane. It doesn't make any sense to me."

Watch a promo featuring Hulk Hogan and Brutus, AFTER THE JUMP…