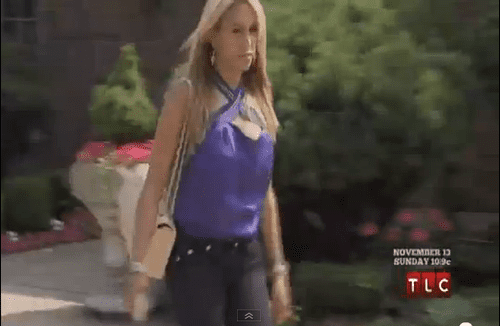 The woman pictured above is one of the Muslims featured in the new TLC reality show, All-American Muslim. According to TLC:

All-American Muslim takes a look at life in Dearborn, Michigan–home to the largest mosque in the United States–through the lens of five Muslim American families. Each episode offers an intimate look at the customs and celebrations, misconceptions and conflicts these families face outside and within their own community.

Not all of the show's Muslims look like the woman above. Some wear the hijab. Some wear tee-shirts. One's a cop and wears a policeman's uniform. They're a pretty diverse bunch. At least, they seem diverse to this viewer.

Other viewers see things differently. The Florida Family Association. for example, looks at the show's cast and sees only "propaganda that riskily hides the Islamic agenda's clear and present danger to American liberties and traditional values." (Not incidentally, the Association's opinion of LGBTs is similar to that of most fundamentalist Muslims.) The Association has lately encouraged its supporters to contact the show's sponsors with complaints to that effect, and now Lowe's, the hardware retailer, has pulled its ads.

From The Hollywood Reporter:

On its Twitter feed, the home improvement retail company said Friday in response to a tweet: "We did not pull our ads based solely on the complaints or emails of any one group. It is never our intent to alienate anyone. Lowe’s values diversity of thought in everyone, including our employees and prospective customers."

A Lowe's spokeswoman later told The Hollywood Reporter: "We understand the program raised concerns, complaints or issues from multiple sides of the viewer spectrum, which we found after doing research of news articles and blogs covering the show. We based our decision to pull the advertising on this research and after hearing the concerns we received through emails, calls, through social media and in news reports."

You can see a trailer for All American Muslim AFTER THE JUMP. If that's a cover for radical Islamism, then The Cosby Show was a beard for the Black Panthers, and 7th Heaven was a Trojan horse for the Phelpses.