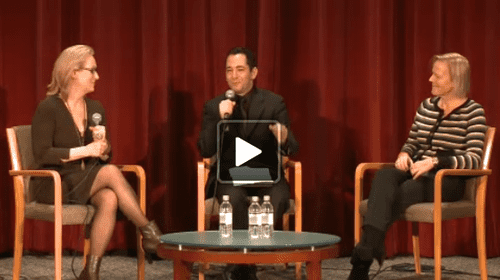 Apparently, the new Thatcher biopic, Iron Lady, is long on Margaret-Thatcher-The-Woman and short on Margaret-Thatcher-The-World-Historic-Personage. Some critics have grumbled about the artists' insistence on humanizing the old boogylady, while acknowledging how affecting it is to see Meryl Streep, Thatcher's onscreen avatar, done up as a doddering old post-retirement Maggie in the grips of burgeoning dementia. Listening to Streep and her director, the fantastic Phyllida Lloyd (who's a lesbian, incidentally), dish on the film with The Hollywood Reporter, it becomes clear that it's all intentional — the artists believed Maggie's politics were among the least interesting things about her. Towards the end, Streep gets off one of the coolest and most surprising answers I've heard an actor give in an interview:

Hollywood Reporter: What would you each like people to, in a perfect world, take away from this film? Would you like them to think differently in some way about Margaret Thatcher or what she represented, or the era that she came from? Is there something you'd be very pleased to know people left here thinking?

Meryl Streep: I would like to think that everybody that got on a subway and saw some old lady sitting across from them, that they would imagine that a whole huge life lay behind all those wrinkles, and that seemingly nondescript, forgettable [face]. I mean, there is almost nothing less interesting in our consumerist society than an old lady. Um … dismissed. We don’t make movies for her. We don’t give a damn. You can’t sell her anything, she doesn’t buy anything. But just the idea that everything — the whole panoply of human experience, births, deaths, struggles, joy — everything’s in there. And just to imagine that. That’s what I would hope.

Watch the interview AFTER THE JUMP …