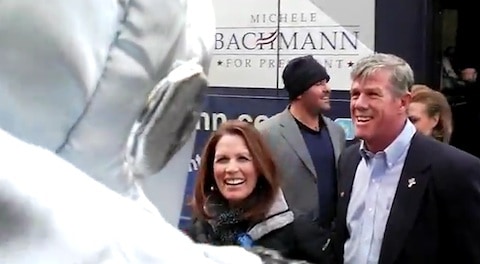 Michele Bachmann was confronted by a 'gay robot' outside the Hamburg Inn restaurant in Iowa City yesterday. The 'gay robot' was a man who reportedly heckled Bill Clinton at the University of Iowa in 2007.

"Not only are you a homophobe, you are a robophobe," the man dressed as a robot told Bachmann as she entered the venue.

After following her in, the robot continued, to boos from the crowd: "Michele Bachmann I will not rest until you support equal rights for human and robot gay people."

"I was programmed to do this. I cannot help myself," the robot continued.

"Go back in the closet," yelled a Bachmann supporter.

After being escorted out, a police officer told the robot he would face additional charges if he tried coming back in.

Watch three videos, AFTER THE JUMP…

Previous Post: « Mom and Dad, I Have Something to Tell You…: VIDEO
Next Post: Taylor Swift Releases Song for ‘The Hunger Games’ Film Adaptation: VIDEO »