On Monday I posted about the heinous bill that passed the Nigerian Senate banning same-sex marriage in the country. The bill mandates 14 years in prison for those who marry and 10 for those who help them. 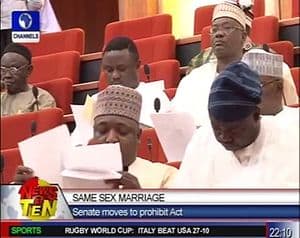 But it's worse than that, as Amnesty explains:

By broadly defining “same-sex marriage” as including all same-sex relationships, and targeting people who “witness”, “aid” or “abet” such relationships, the bill threatens the human rights of a large number of people.

The group has condemned the bill:

“Nigeria’s House of Representatives should show leadership and uphold the rights of all in Nigeria by rejecting this reprehensible bill,” said Erwin van der Borght, director of the Africa Programme.

“If passed, this measure would target people on the basis of their identity, not merely their behaviour, and put a wide range of people at risk of criminal sanctions for exercising basic rights and opposing discrimination based purely on a person’s actual or presumed sexual orientation or gender identity.”

It would place a wide range of people at risk of criminal sanctions, including human rights defenders and anyone else – including friends, families and colleagues – who stands up for the rights of lesbian, gay, bisexual or transgender people in Nigeria.

Individuals could face imprisonment based on nothing more than their actual or assumed sexual orientation or gender identity, or stemming from allegations about their relationship status or consensual sexual conduct.

More on the bill her from the Coalition for the Defense of Sexual Rights in Nigeria.

The group has posted an urgent call for action, which you can read in full, AFTER THE JUMP…

Our esteemed friends and colleagues,

Many of you have been asking us how you can support our struggle against the Same Gender Marriage Prohibition bill, 2011, under consideration in the Nigerian Parliament, which we learned yesterday from the Senate's voting has allegedly some new criminal provisions as opposed to the first version.

The Coalition for the Defense of Sexual Rights (CDSR) has been making a number of efforts with the support foreign missions, embassies and international organizations to best address the circumstances around the proposed legislation. We are extremely concerned and disappointed with the conduct of the public hearing by the Senate Committee on Human Rights and Judicial Matters on the Same Gender Marriage Prohibition Bill 2011, which was held on Monday 31st, October 2011. A number of delegates from the US and EU countries missions in Nigeria attended the public hearing and noted the biased nature of the public hearing, which included name calling and profiling for civil society organizations and individuals activists opposing the bill.

According to a recent development reported by the Associated Press, by the Nigerian television station AIT and several other electronic media this afternoon, the Senate, during its proceedings to vote the Same Gender Marriage Prohibition Bill, 2011 took an extremely serious decision, which seems to bring us back to the most draconian version of the bill proposed in 2006. The bill would have been modified from the version as we know it and voted to include 10 years imprisonment for public display of same-sex amorous relationships directly or indirectly, which would make it criminal any organization or group that supports LGBT rights. The amendments allegedly reintroduced the ban for "gay clubs or organizations"

We fear that not only the Senate did not listen to the civil society expressing their contrariety to the bill, but in an unprecedented decision, it decided to punish the presence of civil society that was against the bill during the public hearing.

If the amendments to the bill are confirmed, the Same Sex Marriage Prohibition Bill 2011 will have a dangerous impact on the possibility to carry out any intervention, activity, action or program on HIV/AIDS and human rights advocacy for lesbian, gay, bisexual, transgender and intersex persons.

Clearly the new version of the bill, if confirmed, tries to criminalize homosexuality and any form of LGBT advocacy, seriously affecting freedom of speech, freedom of expression and association with severe criminal provisions.

The effort to stop a similar bill in 2006 was indeed made successful by the enormous and valuable contributions made by international organizations, foreign embassies and missions accredited to Nigeria, foreign government officials in the respective capitals, and different groups and individuals who share the same concern with the Nigerian civil society organizations and LGBT activists on the protection of human rights.

We would, in a moment in which we face a similar challenge, call upon our friends and colleagues from the international community, including international organizations, Embassies, Missions, friendly governments, and CSOs abroad to please go ahead as they did in the past to send their concerns against the Same Gender Marriage bill 2011 to the Nigerian President, the House of Assembly, the Senate, and other relevant government agencies.

As already mentioned the implications of the bill with its recent modification would affect our tireless and long years of work in the protection and promotion of human rights, HIV/AIDS prevention, and the entrenchment of democracy. These implications are only among the few we are anticipating, but more implications with severe consequences may manifest if the bill will be approved by the Nigerian National Assembly.

The new criminal provisions, if approved, will represent a serious threat for the life of every LGBTI person as well as every advocate for LGBTI rights and sexual rights due to the potential enforcement by state and non-state actors.

What you can do against the proposed Same Gender Marriage prohibition bill;

We call on ministers of foreign affairs, foreign missions accredited to Nigeria, international organizations and civil society to send formal letters and statements to the Nigerian president, to the presidents of the Senate and the House of Representatives asking them to:

– Withdraw the bill due to its implications on health, HIV/AIDS and protection of human right.

– Call on the Nigerian President and the Presidents of the Senate and the House of Assembly to guarantee safety and protection for all human rights defenders and all individuals irrespective of their sex, gender, sexual orientation, gender identity and expression, or religion.

– Call on the Nigerian government and parliament to respect international human rights law, particularly their obligations under the International Covenant on Civil and Political Rights.

– Call on the Nigerian Government to remove discriminatory laws that criminalize sexuality, gender identity and expression in the federal and other parallel legal systems followed in the country.

We call on heads of governments, ministers of foreign affairs and other relevant officials, foreign missions accredited to Nigeria, presidents of Parliamentary Assemblies to raise their concern in public and in private with their Nigerian counterparts in any possible circumstance, making it clear that if this bill were to be approved Nigeria would place itself outside the community of democratic nations, in a moment in which the country is facing serious internal and external anti-democratic threats.

Previous Post: « 30 Years Positive: VIDEO
Next Post: ‘It Gets Betterish’ Goes in for an HIV Test: VIDEO »