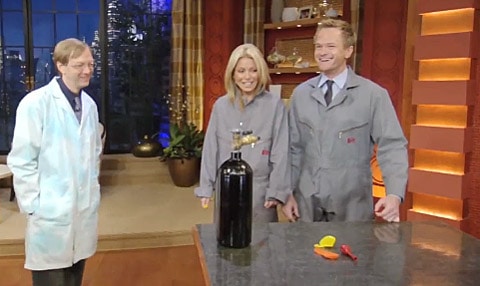 Neil Patrick Harris apologized today for using the word "tranny" on Live with Regis and Kelly this week.

Tweeted Harris: "Truly sorry for saying the word 'tranny' on Live this week. Twice! Should have been more thoughtful. Didn't at all mean to offend."

Harris, with Kelly Ripa had inhaled from a canister of Sulfur Hexafluoride, a chemical gas that makes your voice deep, and said, "I've never sounded more like a tranny in my life" after doing an imitation of serial killer Buffalo Bill from Silence of the Lambs.

The moment caught the attention of trans bloggers who rightfully condemned the comparison, as well as Dan Savage, who was recently glitterbombed by trans activists who said they were angry about, among other things, his use of the word "tranny". Savage's response to the NPH incident is here.

GLAAD said it is reaching out to Harris about the incident:

It’s heartening to see a celebrity of Harris’ stature recognize and apologize for using the slur in such a timely manner, and for greater media attention being paid to its use.  Many people do not realize that the word "tr*nny" is one of the most hurtful and dehumanizing slurs that transgender people hear.  Most transgender people associate that word with personal experiences of violence, hatred and derision.

GLAAD is reaching out to Mr. Harris about the incident.

Clip is posted, AFTER THE JUMP…