In a new piece on his blog, Marine Officer Matthew Phelps talks about bringing a date to the recent Marine Corps Birthday Ball in San Diego. This is perhaps one of the best glimpses into what it's like for military service members post 'DADT' repeal that I have ever read. Very inspiring piece. 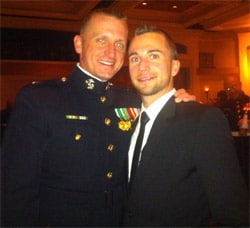 Phelps writes of the challenges living without 'DADT' has produced:

There is an enormous pressure–perhaps self-induced, I admit–to prove that I can do my job as well as (if not better than) anyone else. I had always placed this pressure on myself, as all of my gay military friends had, because I felt I had something to prove, even if no one else knew I was doing it. For my entire career I lived with the idea that people–from conservative civilian lobbyists to my fellow Marines to my Commander in Chief–believed I was incapable of succeeding as a Marine because I was gay. They thought we had no place in the military, and therefore it was up to us to be beyond reproach and the very best in our fields. In many ways that pressure has since been compounded, because it’s no longer a secret struggle.

The world is watching as we expose our true selves. Those who opposed repeal are scrutinizing every one of us, waiting for the opportunity to say that repeal was a mistake. As an officer and a leader of Marines, I lead from the front, setting the example for junior Marines and officers and to prove that there is no need to describe my service as that of a gay Marine, but just a Marine. Because of this, every word I say, every email I write, every look I give is a conscious effort, as carefully thought out and worded as the letters, essays, and interviews I gave prior to repeal. Each and every moment of my life holds in it the possibility of discredit and disservice to my Corps. I cannot fail the Marines who are counting on me to pave the way forward as a Marine in a post-DADT military.

And later describes the moments of entering the Ball with his date Brandon, calling the Ball "the most obvious example" of the new pressure he feels:

Standing there and looking around to see Marines throughout the lobby, we both thought, “What the hell are we doing here?” We looked at each other, took a deep breath, and stepped inside. We were careful from the very beginning not to be too close to each other. At one point, while the one of us who passed land navigation as a lieutenant in Quantico, VA managed to get lost on the way to the bathroom, our hands bumped and we quickly pulled them back. We made our way to the bar because the glass of wine and cocktail we had while getting ready weren’t taking the edge off as effectively as we’d hoped. A Marine I knew from work walked up and introduced his wife.

I had gone over the next moment a million times in my mind. Was he my “friend”? My “boyfriend”? My “date”? How should I represent our relationship in the most respectful way to people who might not be happy we were there together? I knew there were people who didn’t yet know I am gay (not because I had avoided telling them, but because it hadn’t come up yet in day-to-day conversation), so how would I introduce Brandon in a way that made it clear but still allowed them to avoid being caught off-guard? What about the people who suspected I was gay but that I’d never confirmed it to? How do you tell people something they already know without feeling like an idiot when they look back at you and say, “No kidding. Who didn’t know?” (Trust me, it happened plenty of times before when I had stressed about “coming out” to people who had known far sooner than I did.) I thought briefly about whether any straight Marine had ever asked himself those questions, or even considered whether it would be appropriate to take a date.

Take the time to read his whole post HERE.

On Marines, equality, and my date to the Marine Corps Birthday Ball [work in progress]