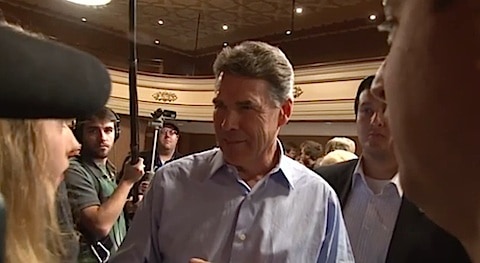 Rick Perry was confronted by a teen girl after a town hall in Decorah, Iowa yesterday, about his views on gays in the military.

“I just want to know why you’re so opposed to gays serving openly in the military, why you want to deny them that freedom when they’re fighting and dying for your right to run for president,” Rebecka Green, a high school student from Decorah, asked the Texas governor.

“Here’s my issue. This is about my faith, and I happen to think, you know, there are a whole hosts of sins. Homosexuality being one of them, and I’m a sinner and so I’m not going to be the first one to throw a stone,” Perry said. “I don’t agree that openly gays should be serving in the military. ‘Don’t Ask, Don’t Tell’ was working and my position is just like I told a guy yesterday, he said, ‘How would you feel if one of your children was gay?’ I said I’d feel the same way. I hate the sin, but I love the sinner, but having them openly serve in the military, I happen to think as a commander in chief of some 20,000 plus people in the military is not good public policy, and this president was forced by his base to change that policy and I don’t think it was good policy, and I don’t think people in the military thought it was good policy.”

Green later told ABC News she disagrees with Perry: “I’m openly bisexual and I don’t want to be told that if I wanted to serve in the military that I couldn’t, and I just think that policy is completely ridiculous that he thinks that. I just don’t like it. Him or nobody should be able to tell somebody who they can or can’t love.”