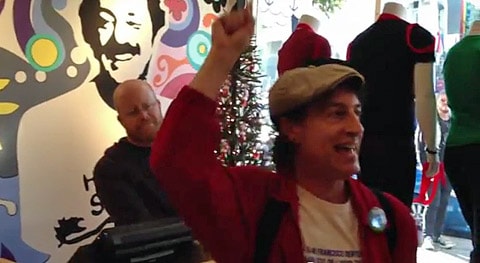 A group of LGBT activists and allies supporting the 99 Percent Movement staged an "Occupy the Castro" protest over the weekend and stood in at the Human Rights Campaign store in Harvey Milk's old camera shop as one of several stops in the neighborhood.

Writes activist Michael Petrelis: "Over the course of ninety-minutes we chanted, spoke out, marched in the streets without a permit, distributed flyers, went into CitiBank's branch on Castro with a bawling baby and dozens of us surrounding a banker as a letter was read to him demanding that his and all banks start paying for public health and education while ceasing evictions and foreclosures…"