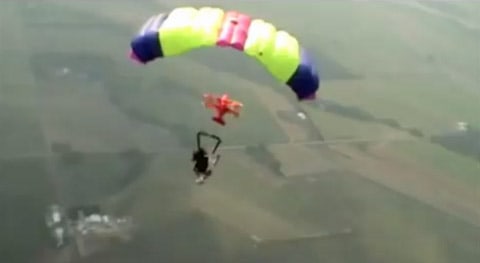 A skydiver posted the story and film of the harrowing accident in which he became entangled in his partner's canopy and plummeted to a cornfield, breaking his pelvis, back and neck, and undergoing instant paralysis.

The entire episode is on video, including the arrival of paramedics. He is now a quadriplegic.

He writes, on YouTube: "It's taken me four and a half years to be able to watch this video."

Watch the riveting and frightenng clip, AFTER THE JUMP…

Over the weekend, he posted it to Reddit, where he is answering questions about it.

I glanced at the ground a couple of times. The last time I was not far above tree-top level and my thought was, "I hope this doesn't hurt," (hoping for and expecting death).

The impact felt like touching and electric fence then suddenly painless. I lay there motionless watching the clouds. I didn't even try to move, afraid to provoke the wrath of whatever injuries I had sustained. When Razz appeared, he had a smile from ear to ear. This brought me peace until breathing became difficult. I started to feel panic as I suffocated. When I felt my eyelids flutter I knew I was going to be spared that feeling, hence, "this isn't so bad."