Tesco, Britain's largest supermarket chain is under fire from Christian groups over 2008 remarks made by its head of research and development Nick Lansley on a Flickr account, the Telegraph reports: 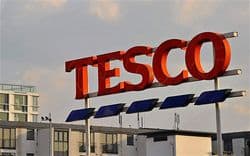 In a message on his profile page on Flickr.com, he said: “I’m…campaigning against evil Christians (that’s not all Christians, just bad ones) who think that gay people should not lead happy lives and get married to their same-sex partners.”

The remarks, which have now been removed from the photo sharing website, caused outrage among Christian groups, who said they would refuse to shop in the chain’s stores in protest.

Colin Hart, director of the Christian Institute, said: “I won’t be shopping at Tesco this Christmas, and I am repeatedly hearing from other Christians who have already come to the same conclusion.

“Mr Lansley is entitled to his opinions, and Christians are entitled to choose not to shop at Tesco.”

Tesco distanced itself from Lansley's remarks: "Our values as a company are such that we abhor criticism of any religion, and we knew nothing about Mr Lansley’s comments until they were brought to our attention. We are very sorry that anyone might have thought that there was any blurring of the boundary between his personal comments and his work for Tesco. We have therefore asked him to remove the comments, and he has done so. "

Previous Post: « Towleroad Guide to the Tube #1025
Next Post: ‘The Dark Knight Rises’ Gets a Trailer: WATCH »