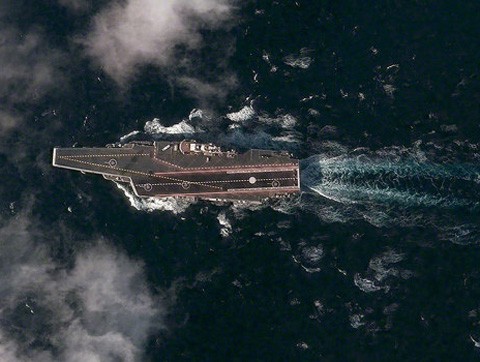 A Chinese aircraft carrier was photographed by a U.S. satellite for the first time at sea on December 8, the Guardian reports:

Stephen Wood, director of DigitalGlobe's analysis centre, said he was confident the ship was the Chinese carrier because of the location and date of the image. The carrier has generated intense international interest because of what it might portend about China's intentions as a military power.

The former Soviet Union started building the carrier, which it called the Varyag, but never finished it. When the USSR collapsed, the ship ended up in the hands of Ukraine, a former Soviet republic.

China bought the ship from Ukraine in 1998 and spent years refurbishing it. It had no engines, weaponry or navigation systems when China acquired it. It has said the ship is intended for research and training, which has led to speculation that it plans to build copies.

Meanwhile, the U.S. officially ended its mission in Iraq:

In a fortified concrete courtyard at the airport in Baghdad, Defense Secretary Leon E. Panetta thanked the more than one million American service members who have served in Iraq for “the remarkable progress” made over the past nine years but acknowledged the severe challenges that face the struggling democracy.

And Iran claims it can control the downed U.S. drone.