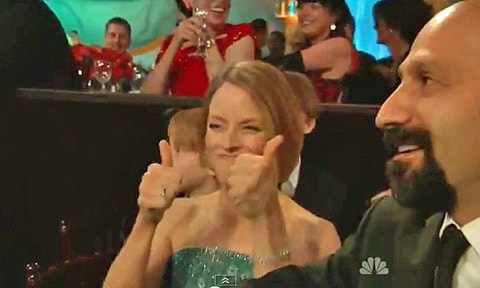 One of Ricky Gervais' more notable digs in his arguably less cutting opening monologue this year came at the expense of Jodie Foster's reluctance to talk about her sexuality, and the film she starred in with Mel Gibson.

"No smut or innuendo. And I’m not to libel anyone. And I must not mention Mel Gibson this year. Not his private life, his politics, his recent films or especially not Jodie Foster’s Beaver. I haven’t seen it myself. I’ve spoken to a lot of guys – they haven’t seen it either but that doesn’t mean it’s not good.”

Of course Gervais wasn't outing Foster, who seemed to love the joke. She pretty much told the world who's seen her beaver four years ago.