Cynthia Nixon released a statement to The Advocate clarifying some of her recent remarks about choice and sexuality. 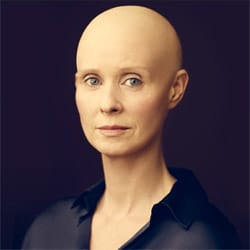 "While I don't often use the word, the technically precise term for my orientation is bisexual. I believe bisexuality is not a choice, it is a fact. What I have 'chosen' is to be in a gay relationship. As I said in the Times and will say again here, I do, however, believe that most members of our community — as well as the majority of heterosexuals — cannot and do not choose the gender of the persons with whom they seek to have intimate relationships because, unlike me, they are only attracted to one sex. Our community is not a monolith, thank goodness, any more than America itself is. I look forward to and will continue to work toward the day when America recognizes all of us as full and equal citizens."

Previously…
Cynthia Nixon Won't Call Herself Bisexual Because 'Nobody Likes the Bisexuals' [tr]
Cynthia Nixon: For Me, Being Gay is a Choice [tr]