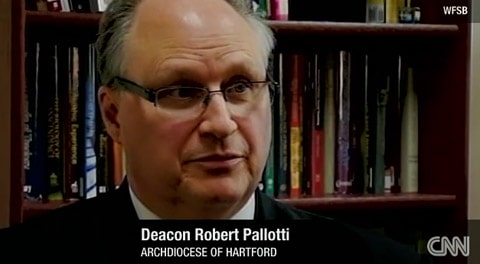 The Archdiocese of Hartford, Connecticut has launched a new program called 'Courage' which encourages gay Catholics to live a 'chaste' life by abstaining from having sex, whether they are legally married (as is possible in the state) or not, the NYDN reports:

The controversial ministry group, called Courage, will offer confidential counseling to gay church members who are “struggling” to reconcile their sexual orientation with Vatican teachings, a church official told the Daily News.

“We want to reach out to people in the Roman Catholic Church who often struggle with the church’s moral position,” Deacon Robert Pallotti told The News. “The church is not against people with same-sex attraction, just their acting out sexually.”

He said people who voluntarily seek out the program will be “affirmed and supported as Roman Catholics trying to remain faithful to church teachings.”

The ministry will promote abstinence, he confirmed, but it will accept that gay people are born with their sexual orientation.

Watch a CNN report on the new program, AFTER THE JUMP…