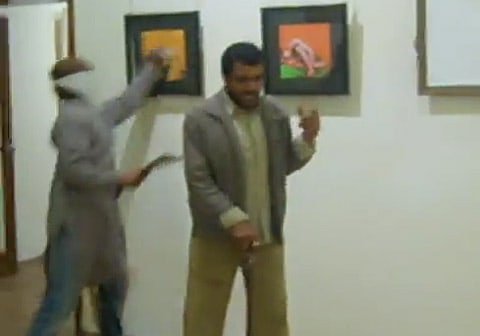 A gay artist has been attacked in New Delhi at an exhibition of his work, the Times of India reports: 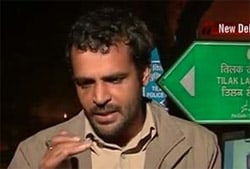 The artist, Balbir Krishan, said the attacker entered the solo exhibition space at Lalit Kala Akademi with his face covered by a handkerchief. He pushed and kicked Krishan, a double amputee who has lost both his legs, while hurling insults all the while.

Krishan, 38, from a village called Bijrol in Baghpat district of Uttar Pradesh, had received several threats over phone on Wednesday. The calls — made from phone booths – accused the artist, himself homosexual, of "spreading" homosexuality in the country. According to Krishan, the caller said, "Tuney Hindu dharam ko bigarne ka theka laga rakha hai (You are determined to ruin Hinduism)." Before that, posters advertising his exhibition at Garhi studios and near Jamia Milia Islamia, were ripped and burnt.

The disturbing attack on Krishan and his work was captured on video.