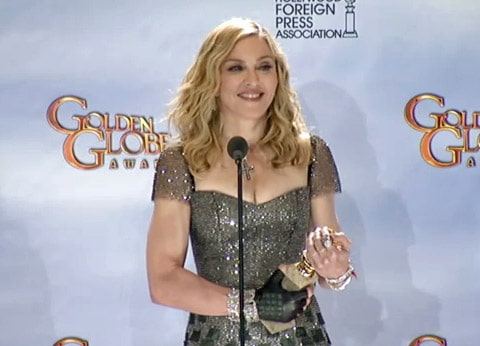 Madonna, winner of Best Song at the Golden Globes for "Masterpiece" from the W.E. soundtrack, was asked many questions when she got backstage after winning her Golden Globe.

Do you still use Pilates to stay in shape? Who's the first person you're going to call? What is something you never travel without? Who is your style icon and what item in your closet can you not live without? Why is this one of the most creative times in your career? What inspires you?

The new album and the Super Bowl?

Well I did a good majority of the record with Martin Solveig, who is a DJ/producer. I love his sound, it’s really fresh. It doesn’t sound like anybody else’s. He’s brilliantly talented. Happy, I would say his music is happy. It puts a smile on your face and I hope my record does that too. I collaborated again with William Orbit who tends to make me more introspective and a bit… I don’t know… His songs tend to be… I don’t want to say dark, but more thoughtful and introspective. It’s a good combination of the light and the dark. Oh yes, lots of dancing, cheerleading, football players… you name it!"

How does it feel to beat Elton John (whose sour face upon the announcement of the winner was the topic of much conversation online)?

"I hope he speaks to me for the next couple of years. He's known to get mad at me…He's brillant and I adore him, so, he'll win another award. I don't feel bad."