Margaret Court, the Grand Slam tennis pro-turned Evangelical minister, who has been speaking her opposition to marriage equality in the last few weeks, says threats of a protest at the Australian Open won't keep her from attending, The Australian reports: 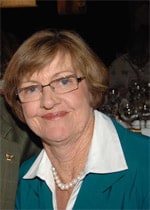 "I have always been a champion and always loved what I do and love tennis. I think it is very sad they can bring it into that. It is hard that they can voice their opinions but I am not allowed to voice my opinion. There is something wrong somewhere.

"We live in a free society and I stand up for families between a husband and a wife. I won't ever back down on that."

"To dismantle this sole definition of marriage and try to legitimise what God calls abominable sexual practices that include sodomy, reveals our ignorance as to the ills that come when society is forced to accept law that violates their very own God-given nature of what is right and what is wrong."

After anger from fellow tennis players Billie Jean King and Martina Navratilova and threats of a protest by LGBT rights groups at this month's Australian Open, Court says "I don’t hate homosexual people" but stands by her remarks.

Court added: "I think I have a right, being a minister of the gospel, to say what it says from a scriptural side. I have been married for 44 years this year and, to me, marriage is something very special, wonderful, ordained by God. I look at the children of our next generation and think of the problems they are having in America with all this — we don't need it in our nation."