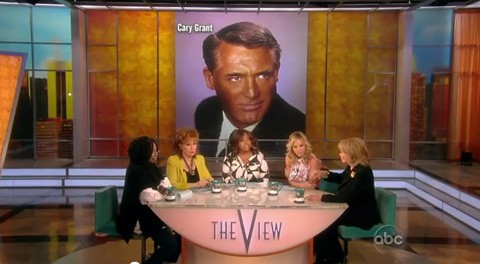 The ladies of The View yesterday discusseda new book by 88-year-old Scotty Bowers called Full Service: My Adventures in Hollywood and the Secret Sex Lives of the Stars. Bowers "a former Marine, was said to have run a type of prostitution ring for gay and bisexual men in the film industry" according to the NYT.

At the same time, a lot of what Mr. Bowers has to say is pretty shocking. He claims, for instance, to have set Hepburn up with “over 150 different women.” Other stories in the 286-page memoir involve Spencer Tracy, Cole Porter, the Duke and Duchess of Windsor and socialites like the publisher Alfred A. Knopf. “If you believe him, and I do, he’s like the Kinsey Reports live and in living color,” said Mr. Tyrnauer, who recently completed a deal to make a documentary about Mr. Bowers.

“Full Service” at the very least highlights how sharply the rules of engagement for reporting celebrity gossip have changed. The sexual shenanigans of movie stars were a currency for tabloids stretching back to Hollywood’s earliest days, but studios and, subsequently, squadrons of privately hired public relations experts could usually keep all but the most egregious behavior out of the news media. Secrets were kept.

Hear what the ladies of The View have to say about outing celebs.