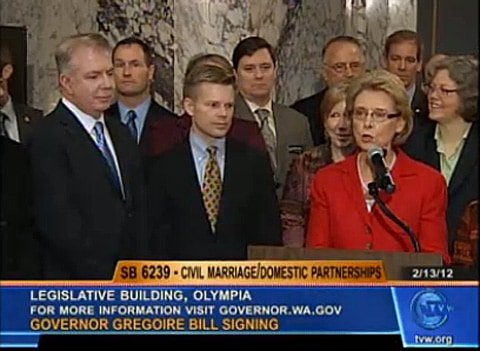 The state reception room at the Capitol was packed with gay rights supporters and at least 40 lawmakers from the House and Senate Sen. Ed Murray, a Seattle Democrat who is gay and has sponsored gay rights legislation for years, told the cheering crowd: "My friends, welcome to the other side of the rainbow. No matter what the future holds, nothing will take this moment away from us."

As the Democratic governor signed the legislation, a man shouted, "Do not betray Christ!" However, his voice was overwhelmed by gay-marriage supporters who cheered and spoke loudly during his outburst.

Bob Struble, 68, of Bremerton, was removed from the room and said he was given a warning by security. Struble said he believes the state will halt gay marriage in a public vote. "We'll be doing everything we can to overturn this unfortunate law," he said

Opponents are planning to file for a referendum that would put the measure before voters and, in the meantime, stop it from going into effect.