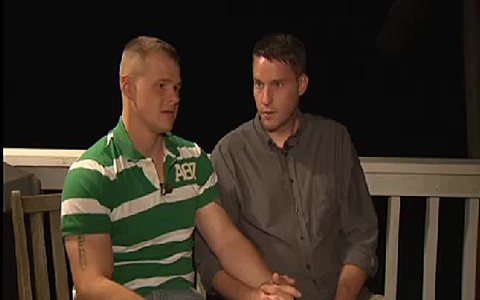 Brandon Morgan and Dalan Wells give another interview about their photo, and that first kiss: 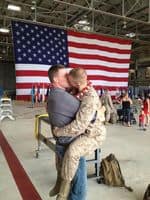 “We’ve known each other for four years, but we only just started going out this last deployment,” explains Morgan. “And I’ve known how I’ve felt about him – ever since we’ve met but had to keep it down.”

“Down” because it’s only been six months since the Don’t ask, Don’t tell law was repealed. Without it, the couple says they’d likely have reunited with a simple handshake.

“Apparently this photo has been dubbed ‘The Kiss Seen or Heard ‘Round the World’ and is breaking barriers,” says Morgan. “People feel more confident to live their own life and be truthful to who they know they are.”

The couple started dating via Facebook two months ago – while Morgan was on his third overseas deployment in four years.

“That’s why that kiss was so crazy. It was the first kiss!” says Wells.

Video may take up to 15 seconds to load in.

Brandon also gives a longer interview to the Daily Beast:

Going through the deployment and having nobody to look forward to coming home to, I emailed some friends and they were like, “Yeah, sure, we’ll come see you at the airport.” At one point I just made a general comment on Facebook like, “Wow, loneliness is really starting to sink in.” And he was the first one and the only one to comment on that.

When he said that, I wrote him a very, very long email. He wrote me back, and then it was what seemed like hundreds of emails a day. Every email he sent me I would read a hundred times. Weeks just flew by and I couldn’t wait to get home, and I was like, “When I get home, I’m going to give him the best kiss I can think of.”

All my superiors are happy for me that I finally have a love, someone to be with, that I’m not always hanging out at the single Marine center on the weekend. I believe that the general consensus was that the military didn’t want this, but the people who say that can’t really speak on the behalf of my Marines. My Marines, my family, have welcomed me, they’ve been very happy for me. We’re a family. They care for me the way they always have.

Previous Post: « Air Freshener Campaign Offers a Whiff of Beefcake
Next Post: Lady Gaga and Mom to Launch ‘Born This Way’ Foundation at Harvard as Students Rally for Expelled Gays »