Lady Gaga and her mother will launch their Born This Way foundation at Harvard today, and Cynthia Germanotta (pictured) is talking to the Daily Beast: 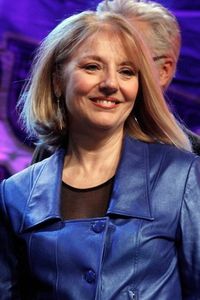 She and Gaga will kick off their foundation on the Harvard University campus this afternoon, with Oprah Winfrey and Deepak Chopra in tow. Also in attendance: a “Born Brave” bus, Germanotta says, that will follow Gaga’s own tour bus across the country in coming months, offering kids at each stop a place to connect.

Germanotta is quick to note that the focus of her new foundation is on “kindness, not meanness,” saying that “bullying is almost overused in the media.” The group plans to partner with three other groups—Harvard’s Berkman Center for Internet and Society, the MacArthur Foundation, and the California Endowment to Empower Youth—to help educate kids, Germanotta says, by connecting Gaga’s fan base with the programs the groups have started…She says this project has long been a family goal. “We always talked about doing something together, giving back,” she says. “As my daughter’s career took off, we started having more serious conversations about it. It wasn’t so much a ‘decision’ as something we always wanted to do.”

Students are planning a rally in conjunction with the visit to demand degrees for students expelled in 1920 by Harvard's "secret court"  for being gay, although the school said today those degrees will not be awarded:

"Harvard’s Faculty of Arts and Sciences does not award posthumous degrees except in the rare case of a student who completes all academic requirements for the degree but dies before the degree has been conferred," the university said in a statement.

"In 2002 the University expressed its deep regret for the way the situation was handled as well as for the anguish experienced by the students and their families almost a century ago."