Last Friday I posted about a man who went overboard on the 'Allure of the Seas' Atlantis gay cruise off of Cozumel, Mexico in the Caribbean. That man has now been identified as 30-year-old Kenneth John Gemmell, a native of Bailieborough, Co Cavan, Ireland. Gemmell was a flight attendant with UAE airlines stationed in Dubai. 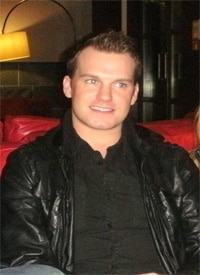 In a statement, Royal Caribbean indicated that Gemmell was seen going overboard at 7:10 am local time and that fact was confirmed by surveillance cameras aboard the ship.

Edward Owen at The Examiner reports that the family is seeking information to bring some closure to their situation:

They are issuing an appeal to anyone on board the ship who might have met Kenneth during the cruise, to touch base with them.  And they particularly would like to hear from the person who witnessed him going overboard.  The family has said they want nothing more than to understand what drove their son, who had just turned 30 last Tuesday, to this.

The family says that some information has already come their way.  One party told them that Kenneth may have been arguing with a ship's crew member (perhaps a bartender) in one of the bars late Thursday night or early Friday morning.  They were also told that the crew member, a man they understood was sharing a room with a Canadian citizen, left the ship in Cozumel.

Because of the lack of information, a family spokesman told examiner.com that some members of the family are finding it hard to accept that Kenneth actually went overboard.

Anyone who has information on this tragedy is asked to email Michael at  michael-at-mhynes.com.  The family says they just want to know what happened to their son.

Just a suggestion, but perhaps Royal Caribbean could share their CCTV footage with the family if, as they say, they have it.