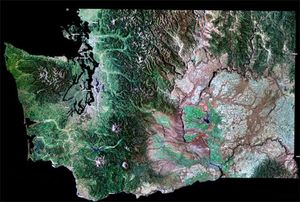 Washington state has passed marriage equality after a 55-43 vote in the House. The bill will now go to Governor Chris Gregoire who introduced, and will sign it.

Sen. Ed Murray, D-Seattle, the prime sponsor of the bill passed today, and Gregoire watched the debate from the Democratic side of the chamber.

"It took the courage of many legislators who struggled with a difficult issue and decided to do what they believe is best for all Washingtonians to make today's historic vote possible," Murray said in a statement issued before the vote. "It will bring to an end what has been, for me, a 17-year-struggle in the Legislature to recognize the civil rights of gay and lesbian couples in our state.

"I expect a referendum on this issue, and I remain confident that, ultimately, marriage equality will be Washington's law," he said.

Eli Sanders at Seattle paper The Stranger has a liveblog if you'd like to read the archive, and info on what's next:

Once the governor signs the bill—which has to happen within five days of her receiving it from the legislature—referendum mayhem begins. The National Organization for Marriage recently told the Seattle Times that it will file for a referendum on gay marriage "before the ink is dry on the governor's signature." NOM—which spent millions to repeal marriage equality in California and Maine—will then have 90 days from March 8, the scheduled end of the legislative session, to work with its allies to gather 120,557 valid signatures in support of their referendum. If they don't get the required signatures, gay marriages could begin in mid-June. If they do get the signatures—which they probably will—we'll be voting on gay marriage in November. Assuming it passes, gay marriages will begin after the election is certified sometime in December. But don't get excited yet: No state has ever upheld same-sex marriage at the ballot.