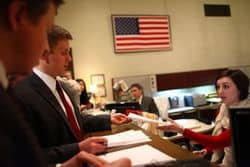 They have until June 6, a political D-Day for collecting and submitting 120,577 valid voter signatures to put marriage equality on the November ballot.  The right of same-sex couples to wed would be blocked until voters decide the issue.

"Marriage is reserved for a man, a woman and the children that they raise," said Joseph Backholm of the Family Policy Institute of Washington. The state of Washington should not be "validating" gay and lesbian relationships, Backholm told reporters at the Secretary of State's office.

Sponsors of Referendum 73 include groups at the right end of the political spectrum such as Concerned Women for America and the National Organization for Marriage.  The campaign is being mounted under the banner of a group called Preserve Marriage Washington.  Backholm predicted that the campaign will be "expensive", with estimates in the $2-4 million range for each side.

"Preserving marriage as the union of one man and one woman is worth fighting for," said Brian Brown, NOM's president. "Marriage is a cornerstone of society that not only unites a couple to each other, but ensures that any children born of their union will have the best opportunity to be raised by their own mother and father. We're committed to giving Washington voters the right to decide the definition of marriage in their state, just as voters in 31 other states have been able to do."