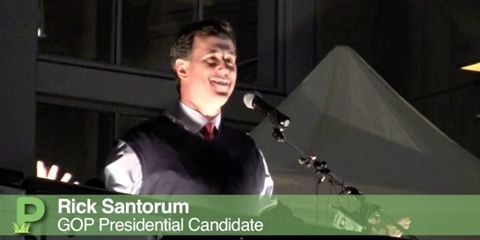 Rick Santorum was faced with a loud group of protesters as he made a campaign stop in Tacoma, Washington last night, Think Progress reports. At least two were arrested and reportedly tased before being handcuffed. He was also apparently glittered.

Watch four videos of the craziness, AFTER THE JUMP…

Said Santorum over a din of shouting:

"I know this is a very important day in Washington. And in many respects a sad day for many people. We saw the law signed into here in Washington state. But it is very important you understand what just happened in another place….in the Ninth Circuit….The Ninth Circuit decided that anybody that disagrees with any of these folks, anyone who disagrees with these folks when it comes to the issue if what marriage is in this country, well they are irrational. That’s what the Ninth Circuit said. They said anybody who disagrees with their decision to shoot down Prop 8 in California, they do so because they are irrational and the only possible reason they can possibly…"

Santorum, forced to yell over the persistent protesters, said he respected their ability to disagree with him.

"Now I gotta tell you, I don't agree with these people but I respect their opportunity to be able to have a different point of view and I don't think they're a hater or a bigot because they disagree with me," Santorum said.

Three protesters were arrested at the event, according to CBS News, including one who threw glitter on Santorum. This is at least the sixth time activists have "glitter bombed" the GOP candidate, who is now a frontrunner for the nomination. The motive cited is often gay rights, and Santorum seems to be a particularly popular target due to his social conservativism.

Watch four videos, AFTER THE JUMP… 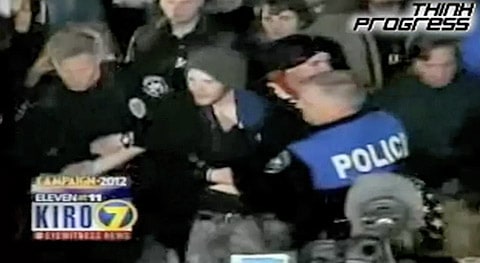 Protestor Tazed at Santorum Rally from www.gayusathemovie.com on Vimeo.

Here's the portion of the speech about same-sex marriage:

Here's another part of the speech: