M.I.A.'s middle finger is this year's wardrobe malfunction, and has the network apologizing, according to the Hollywood Reporter: 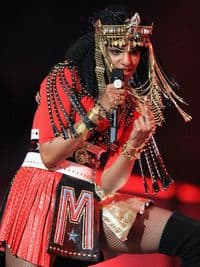 "The NFL hired the talent and produced the halftime show," NBC said in a statement to THR. "Our system was late to obscure the inappropriate gesture and we apologize to our viewers."

For its part, the NFL released a statement that seemed to blame the fault delay system for the airing of the gesture. "There was a failure in NBC's delay system. The obscene gesture in the performance was completely inappropriate, very disappointing, and we apologize to our fans."

M.I.A., known for her rebellious, brash persona and music, performed in a cheerleader outfit for a performance of Madonna's latest single, "Give Me All Your Luvin,'" on which she and Minaj — also onstage in a pom-pom girl uniform — are featured rappers.

If you missed the entire Madonna performance, watch it HERE.