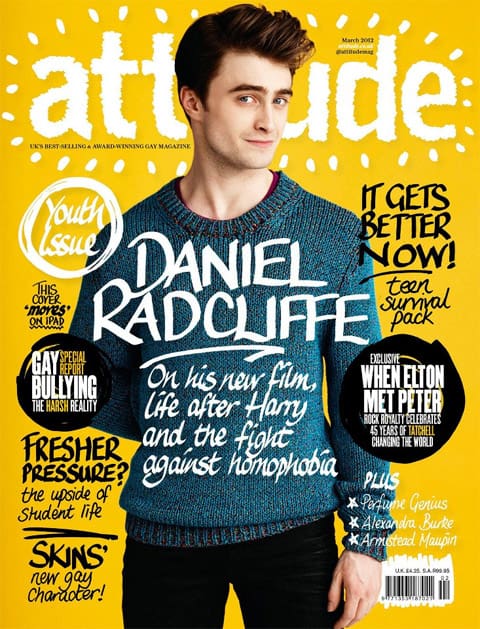 Once again, Daniel Radcliffe demonstrates that he's one of the smartest actors out there, and best advocates for LGBT rights. In an Attitude magazine cover story which I picked up on the iPad, Radcliffe talks at length about anti-gay bullying and why straight kids should show their support. He also has good taste in men. 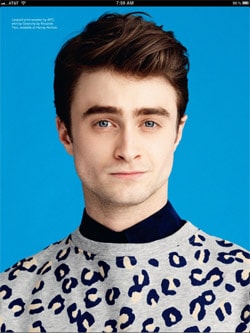 "Don't define yourself by your sexuality, don't define as straight or gay, define yourself as people and help another person if they're in trouble. The ultimate reason gay marriage should be legalized everywhere is because, as a kid, you look to your mum and dad and they're married, then you look at the gay couple who've been together for the same amount of time, but because they can't get married their relationship doesn't seem the same. Yes, gay marriage is about symbolically blessing a relationship, but the larger issue is about transmitting a fundamental message about equality. Gay people should have equality in law everywhere. If you grow up as a young gay man knowing you dont' have the same opportuniteies as everyone else, you're going to feel victimised and massive prejudice towards you."

"I'm not religious, I'm an atheist, and a militant atheist when religion starts impacting on legislation. We need sex education in schools. Schools have to talk to kids from a young age about relationships, gay and straight."

The article notes that Radcliffe has been "disgusted, amazed, stunned" by GOP candidates like Rick Santorum and Michele Bachmann, and their open hostility to gay rights. But he has a special dislike of one in particular:

"…they disgusted me less than candidates like Rick Perry, who made that ridiculous advert wearing 'the Brokeback jacket', and I think pretend to be homophobic just to win votes."

Radcliffe also says he wishes Obama could come out for marriage equality but understands the political underpinnings behind his position:

"Yes, I do, but can he really? Of course he's in favour of it, but he has to be careful about saying so. I'd rather have someone like him in the White House than the alternative."

Finally, has Radcliffe ever considered that he might be gay? Yes. Is he?

"No. I can quite happily say someone is handsome, good-looking, and I can see why someone would want to f**k them, but I've never felt that way about a man myself. There is that moment in your late teens when you ask yourself the question, 'Am I?' but I wasn't…Well, this year I have a talent crush on Ryan Gosling. I think he's fantastic and…(ahem) you know he'd be nice afterwards. He seems smart. If I was gay, I would go for a smart man."