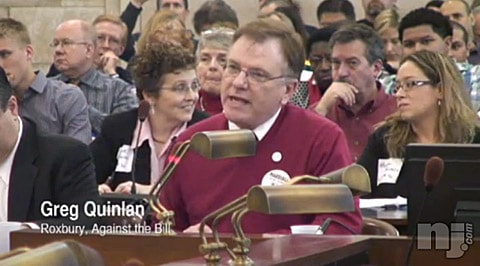 Here's another intense video from what I would call an extremely damaged gay man and human being at yesterday's marriage equality hearing in New Jersey.

"People do it all the time. There are many ex-gays. Anne Heche, to name one. Sinead O'Connor. And myself. I left the homosexual lifestyle almost 20 years ago. Lived as a homosexual activist for 10 years of my life. I'm a registered nurse. I watched 100 of my friends and acquaintances die of AIDS before I stopped counting. I've seen lots of things but homosexuality does not deserve to be codified or recognized as marriage in any state."

Quinlan is the president of Parents and Friends of Ex-Gays & Gays (PFOX). He also demanded an apology from the bill's sponsors for calling people of faith 'bigots':

“I want to talk first of all about something I heard from the very beginning by people of this Legislature that we are bigots as people of faith, because we do not hold that homosexual marriage should be codified. That somehow we are bigots and we are ideologues because we are people of faith. I want to address that hate. Everyone in this room who is a person of faith deserves an apology from one of the sponsors of this bill for calling us bigots.”