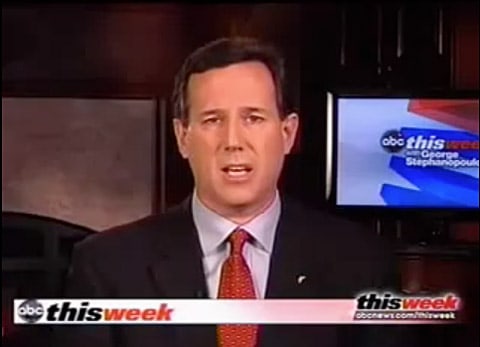 In addition to remarks over the weekend that Higher Education is dangerous because President Obama is trying to indoctrinate kids by suggesting they attend college and remaking them in his own image, Rick Santorum explained to George Stephanopoulos why JFK's 1960 speech on the separation of church and state makes him want "to throw up".

“I don’t believe in an America where the separation of church and state is absolute. The idea that the church can have no influence or no involvement in the operation of the state is absolutely antithetical to the objectives and vision of our country. This is the First Amendment. The First Amendment says the free exercise of religion. That means bringing everybody, people of faith and no faith, into the public square. Kennedy for the first time articulated the vision saying, no, ‘faith is not allowed in the public square. I will keep it separate.’ Go on and read the speech ‘I will have nothing to do with faith. I won’t consult with people of faith.’ It was an absolutist doctrine that was foreign at the time of 1960."