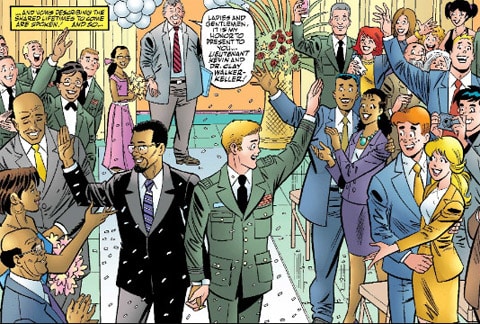 Life with Archie #16, with featured the marriage of gay character Kevin Keller, has sold out, the company announced yesterday. 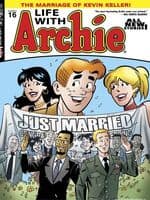 The issue was the target of a boycott threat aimed at Toys R Us by the American Family Association's One Million Moms project, which threatened that its members would stop shopping there unless the store removed the issue from its shelves. Unfortunately for AFA, it looks as though customers did the store's work for them.

Archie Comics, the home to some of the world’s most recognizable characters –  including Archie, Jughead, Betty and Veronica, Josie and the Pussycats and Sabrina, the Teenage Witch — is proud to announce that the company has sold out of LIFE WITH ARCHIE #16.

“Kevin will always be a major part of Riverdale, and we’re overjoyed, honored and humbled by the response to this issue,” said Jon Goldwater, Co-CEO of Archie Comics. “Our fans have come out full force to support Kevin. He is, without a doubt, the most important new character in Archie history. He’s here to stay.”

Earlier this week, Goldwater released a statement about the boycott threat:

“We stand by Life with Archie #16. As I’ve said before, Riverdale is a safe, welcoming place that does not judge anyone. It’s an idealized version of America that will hopefully become reality someday. We’re sorry the American Family Association/OneMillionMoms.com feels so negatively about our product, but they have every right to their opinion, just like we have the right to stand by ours. Kevin Keller will forever be a part of Riverdale, and he will live a happy, long life free of prejudice, hate and narrow-minded people.“