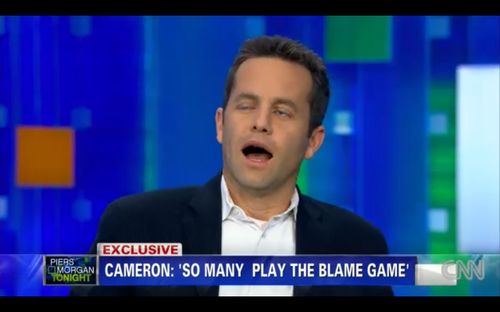 It's unclear how Kirk Cameron keeps scoring TV appearances. Cameron, a not-especially-noteworthy star of B-movies who was once worked in a middling sitcom, spends his days running a ministry called "Living Waters" with his guru, a man named Ray Comfort. This ministry has no discernible purpose other than making science-literate people look good in public debates. (Ray Comfort's a creationist, and one of his best "arguments" against evolution goes like this: Mammals reproduce sexually, a process requiring both a male and a female. Therefore, the first, freshly-evolved elephant/hyena/human/whathaveyou wouldn't have anything to mate with. Bet Stephen Jay Gould never thought of that!) For a price, Living Waters dispatches preachers to deliver sermons on demand. It doesn't do much else.

Nevertheless, Cameron was on Piers Morgan last night, saying not-nice things about gays and lesbians. He didn't seem to want to say those things, but Piers goaded him into it. He didn't say them cruelly, and he was emphatic about the primacy of such things as love, respect, and humility in his version of Christendom. But, he conceded, if any of his kids turned up gay, he'd tell them to be ceibate. 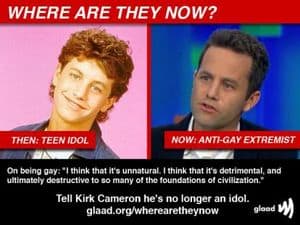 Today GLAAD is making a big deal about the Cameron interview. They've produced the graphic at right, and have posted a press release to their website, which reads, in part:

“In this interview, Kirk Cameron sounds even more dated than his 1980s TV character,” said Herndon Graddick, Senior Director of Programs at GLAAD. “Cameron is out of step with a growing majority of Americans, particularly people of faith who believe that their gay and lesbian brothers and sisters should be loved and accepted based on their character and not condemned because of their sexual orientation.”

… and so forth. Watch the Cameron clip AFTER THE JUMP. (And take heart: Tonight Piers interviews Penn Jillette, which ought to be a lot less dreary.)