Carson Daly mocked gays this morning in a discussion about the JetBlue pilot that had a meltdown on the flight from JFK to Vegas, TMZ reports: 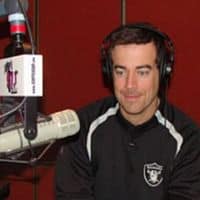 It all went down on Daly's L.A. radio show this morning … when he was talking about the flight and said, "Most of the people were on their way to some sort of security conference in Las Vegas … it was like a bunch of dudes and well trained dudes … thank god."

He laughingly continued, "With my luck, it would be like … 'this is the flight going to [the gay pride parade] in San Francisco … I mean, that would be my colleagues."

Then, changing his voice to sound like a gay stereotype, Carson said, "Uh, we're headed down to Vegas for the floral convention."

Aside from the offensive nature of the remarks, I guess he's never heard of Mark Bingham.

This morning on my radio show I attempted to make fun of myself & offended others by mistake. I sincerely apologize.