Earlier this week, Rick Santorum was asked what he would say to Dan Savage if he ever ran into him.

"I would tell him that I'm praying for him. He obviously has some serious issues. You look at someone like that who can say and do the things that he's doing and you just pray for him and hopefully he can find peace." 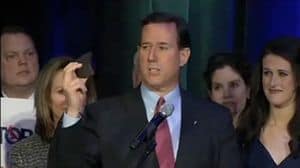 Savage has responded in a statement to Mother Jones:

"Rick Santorum thinks that women who have been raped should be compelled—by force of law—to carry the babies of their rapists to term, he thinks birth control should be illegal, he wants to prosecute pornographers, etc., etc., basically the guy wants to be president so that he can micromanage the sex lives of all Americans…and I'm the one with issues? Because I made a dirty joke at his expense eight or nine years ago and it stuck? I'm the one with issues?