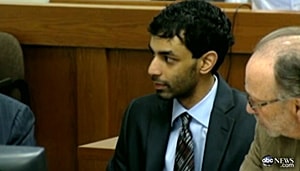 Closing arguments are just beginning in the trial of Dharun Ravi:

Former Rutgers student Dharun Ravi is accused of using a webcam to spy on his roommate's intimate encounter with another man in September 2010. The roommate, Tyler Clementi, committed suicide several days after the encounter, and the case launched a nationwide dialogue about cyberbullying and gay teen suicide.

Ravi faces 15 criminal charges, including invasion of privacy and bias intimidation, a hate crime punishable by up to 10 years in state prison. Ravi is not charged in connection with Clementi’s death.

Jury could get the case by the afternoon.