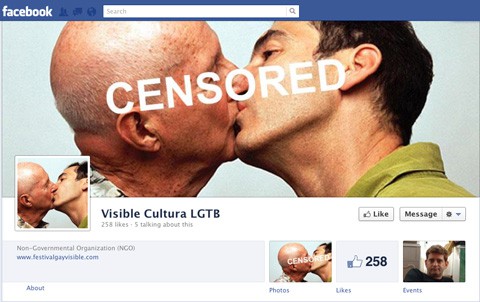 An image of two men kissing by well-known Spanish photographer Juan Hidalgo, utilized by Madrid-based Visible Culture group for its 'Gay Art Looks For A Home' initiative and documentary, was removed by Facebook for breaching a decency code barring images of a "political, sexual or other sensitive" nature. The project has put in its place a "censored" version of the image, above.

"The documentary, shot in Madrid, brings together a thousand works of gay and lesbian donated by over four hundred artists from thirty countries," according to El Pais.

Said the director of the program Pablo Peinado: "The documentary aims to build a dialogue about rights and the fight against homophobia through the culture and identity of the gay community. However, the ultimate goal of this documentary is to find a place to exhibit the work and build a museum of gay culture."

UPDATE: A Facebook spokesman contacted Towleroad and said that the photo has been put back.

"Upon investigation, we concluded the advertisement does not violate our guidelines and was removed in error. The ad is now running and we apologize for the inconvenience."