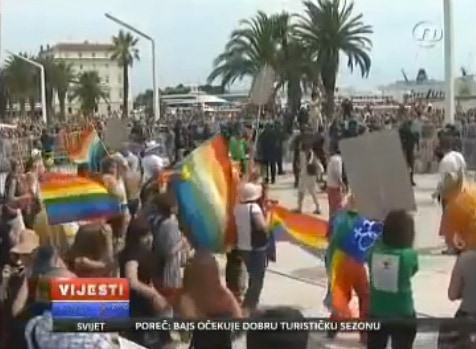 A Facebook group called “Blood will flow in the streets of Split, there will be no gay parade” is threatening violence ahead of this year's Gay Pride parade in June in Split, Croatia.

The group says its goal is to point out to the public that it was unacceptable to hold the “immoral manifestation” which should be held on June 9 in Split. According to the group, the manifestation is “poisoning children”.

“What are they proud of, their disease?”, “Every normal person is sick of parades of mentally ill people (gays). They don’t care about the fact that someone’s child has to watch the sick people”, “Gay bashing June 9, 2012”, “Don’t parade, go get some treatment!” are just some of the comments posted on the group.

Croatian police said they are investigating. Said Spokeswoman Marina Kraljević-Gudelj: "We started the investigation yesterday. The name of the group is problematic. We will try to determine who the author of the group was and we will act in accordance with the law. After that we will inform the state prosecution."

Violence marred last year's Gay Pride march in Split. While there were no direct confrontations because of police presence, observers threw rocks, bottles and firecrackers at the approximately 200 participants, and 100 people were arrested.

Two brief videos of last year's event, AFTER THE JUMP…

Previous Post: « Facebook Removes Gay Kiss Photo, Ironically an Advertisement for a Cultural Project Against Homophobia
Next Post: Liberian Government Denies It Has Anti-Gay Laws, Says It Is Tolerant, Though Evidence Suggests Otherwise »