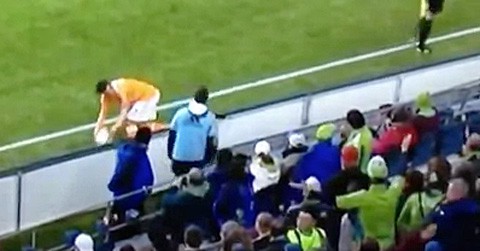 Major League Soccer is reviewing an incident at a game on Friday in night in which Houston Dynamo midfielder Colin Clark called a ball boy a "f**kin' faggot" during a game. The slur was picked up by a mic and caught on camera.

Watch video of the incident, AFTER THE JUMP…

"We are aware of the incident involving Houston Dynamo midfielder Colin Clark during the game in Seattle Friday night, and his public apology for it," MLS said in a statement, according to the Houston Chronicle. "MLS is conducting a thorough review of the facts and examining possible disciplinary action."

Clark, on the sideline for a throw-in, had reached out for the ball boy to throw the ball to him. When the ball boy failed to do so, Clark directed the gay slur and a profanity at him, with an NBC microphone nearby.

He offered his apology through tweets on Saturday. Tweeted Clark:

"I'd like to offer a sincere apology to everyone who watched the game, especially the ball boy for whom I used awful language towards…I didn't mean to disrespect anyone and am sorry for letting my emotions get the best of me. It's not who I am and it won't happen again….I'm very sorry for my actions tonight and I would love for you to consider me a #soccerally moving forward."

Watch video of the incident, AFTER THE JUMP…

Previous Post: « Sold on Stockholm: VIDEO
Next Post: James Cameron Returns from Voyage to the Bottom of the Sea: VIDEO »