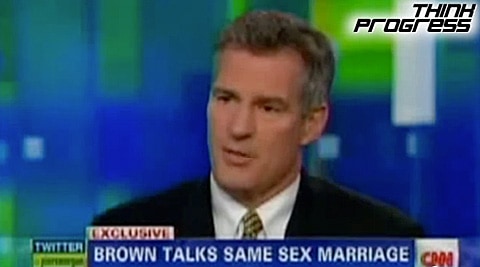 "Well, it’s settled law in Massachusetts. Quite frankly, everybody’s moved on….Certainly some people care. And others have moved on. But they’re really concerned about how they’re going to pay their mortgage. Both people, gay and straight, they’re wondering about how they’re going to pay their mortgage, or if their kids and families are going to come home safe as they travel around the country and the world….It’s debt, deficit, taxes, spending, jobs, national security. We’ve moved on. I encourage everyone else to move on. It should be decided state by state basis. I’m focusing on those other things."

Zack Ford reminds us: "Despite his disinterest in discussing the issue, Brown still opposes marriage equality. Just two weeks ago, Massachusetts Democrats were urging Brown to change his position, but he dismissed it as a 'social issue.' He has voted to ban same-sex marriage twice before, and he even refused to participate in an 'It Gets Better' video for LGBT youth with the Massachusetts Congressional delegation."

Previous Post: « Cyndi Lauper Has It Out with Madonna Over ‘Girl Gone Wild’ Theft: VIDEO
Next Post: The Real Mitt Romney Raps to Eminem: VIDEO »