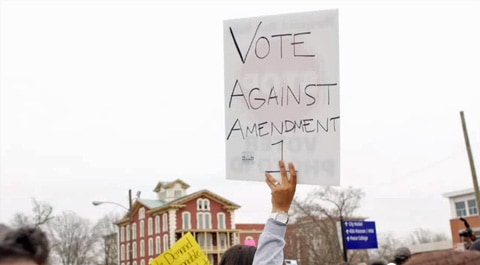 Protect All NC Families, the campaign to stop North Carolina's Amendment 1, which would constitutionally ban same-sex marriage, has launched a new video as it ramps up its efforts to stop the measure, which is on the ballot on May 8.

They've also got a new website with more information on their campaign, and how you can help out.

Organizers tell us that since they began, 117 partners have joined the coalition — including the NAACP, Southerners on New Ground, the Libertarian Party of North Carolina, and numerous faith congregations. They now have 30 staff and seven field offices across the state, and have raised more than $600,000 — more than $150,000 of that has come in online, with more than $80,000 of that number coming in the last three weeks.

They have more than 2,000 donors who have given $92 on average. They have more than 15,000 volunteers and are making 20,000 voter calls per week. Senator Kay Hagan, Lt. Governor Walter Dalton, the conservative Carolina Review, libertarian thinker Michael Munger, Myers Park Baptist and others have come out in opposition to the amendment in recent weeks.

Check out their page to see what you can do, and watch the new video, AFTER THE JUMP…