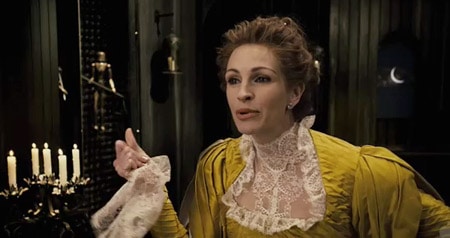 Once upon a time there lived a director with big canvas visual ideas. He would stretch them across just about any surface and start painting. Serial killer craziness (The Cell), muscle queen mythology (The Immortals), and uncategorizable period fantasy (The Fall) were all fair game. Any topic would do including a comic spin on Snow White because why the hell not?

His name was Tarsem Singh or Tarsem or Tarsem Singh Dwandwar or Tarsem Dwandwar Singh because he could never settle on a signature. He would halfheartedly skim screenplays until inspiration struck. Once the spell was cast, he'd toss the script into the fire, chug absinthe, and speed dial Eiko Ishioka. He'd sketch until the last of the words had turned to ash and only his drawings remained*. The end.

*not his real process.

Whether you live happily ever after from watching his movies depends on what you go to the movies for. 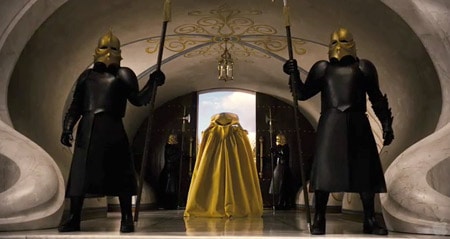 For instance, if you pronounce the words "style" with a sneer and "substance" with reverence in the same sentence you are not the target audience. But if you go to the movies for the images, you've already seen or should see his work  - even the weaker efforts like Mirror Mirror.

The Evil Queen (Julia Roberts) introduces us to Mirror Mirror with a gorgeous zoetrope spin as the movie begins, reminding us that cinema is storytelling. She warns us that it's her story and not the young princess's but the images that follow in a glorious animated prologue tell us otherwise. The Evil Queen finds Snow White completely irritating and since Snow is played by Lily Collins who can blame her? 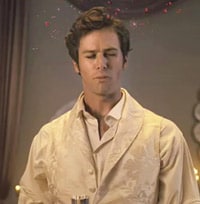 The comedy here is hit or miss with some of the anachronisms landing with a thud. At once point Prince Charming tells Snow he has to save her because the Prince saving the Princess has been 'focus group tested and audiences like it.' [Groan]. This modern winking wouldn't be a hindrance in a movie that wasn't so visually insane but here it's distracting. The prince and his valet really shouldn't be making jokes about how strange their outfits are. They are strange — Julia is so immobile in hers that 75% of her performance is hand gesturing — but it breaks the absurd spell.

Speaking of spells, the Prince is torn between the Queen and Snow White. He loves the young princess at first sight but the Queen has cast a love spell on him to win his heart. He's played by Armie Hammer and often shirtless, so you can't blame her. The love spell is good stupid fun both in the casting and the breaking. Mirror Mirror often comes up with clever reflections of the familiar tale rather than telling it straight but it undermines its own wit constantly by pointing out the revisionism in the bad "jokes" or dialogue. (If I ever watch it again, I'll turn the sound off.) The Queen sees herself in the magic mirror which is a nice twist on the typical portrayals but it's a slightly altered version of herself. The movie is like that, too -just a little bit off though it's trying hard to be "on": Everything cheap-looking is thisclose to looking rich; everything beautiful is teetering towards hideously gaudy.

Sadly, Mirror Mirror is the imaginative costume designer Eiko Ishioka's swan song. She died earlier this year. It's vaguely discomfiting then that Lily Collins wears an actual swan dress and delivers the closing song, an anachronistic Bollywood meets American dance song called "I Believe in Love." The lyrics are inane but Tarsem probably didn't read them. He was undoubtedly gagging over Eiko Ishioka's brilliant rethink of the traditional blue and yellow Disney dress Snow wears while singing it; it sure is something to look at. 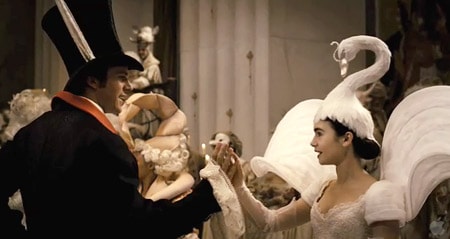